I recently concluded my brief tour of the classic, nay original cyberpunk series Max Headroom. The brevity of which had nothing everything to do with the Digital Archive Project preserving this show in varying degrees of quality, and my media player only being able to handle but a few of them.

Of course, it’s just been released on DVD – so that should by rights now disappear – and I’ll be obey the Golden Rule and buying myself a copy (or asking Santa to sort that out… either way). (Despite this collection not including the original UK movie; which spawned the series and is far superior.)

These past few weeks have also seen me re-watching, for the first time since it was broadcast, the seminal bio- and cyberpunk series, Dark Angel.

By comparing and contrasting these two shows some interesting observations can be made about how the Future is depicted in an SF series. Some lessons to learn can be drawn and some points to focus on highlighted.

But first, a quick run down for the uninitiated…

The Set Up: Two Cyberpunk Futures

Max Headroom is set in a world where everyone is glued to their televisions; in fact it’s illegal for them to have an off-switch.  It’s the tale of Edison Carter, top news reporter for the highest rating network: Network 23. While escaping from some punks intent on killing him – and thus preventing from broadcast a particularly controversial story – he collided into a boom gate. Nearly dead, the last thing he saw was the words: Max Headroom.

Restored from a body bank, his brain is scanned by the young computer genius Bryce… the AI “Max Headroom” was born.

The show explores this world, usually through a story Edison is working on, with a little help from Max – who can appear on any TV screen – and his controller Theora, who can relay him information through his camera and guide him around (much like the Operators in The Matrix).

Dark Angel is the story of Max Guevara. Created in a secret military base, bred and trained to be the perfect soldier. Now hiding out and working as a bike messenger in post-apocalyptic Seattle, she tries to find her fellow escapees, further understand just what she is and evade the evil government agents who are constantly trying to capture or kill her.

Both these TV series are depicting a projected future; an extrapolation based on the then-present.

Max Headroom screened in the mid-80s. It is very much a projection of Thatcherite England (for the UK movie) and its compatriot, for the TV series, Reganite America. It is ambiguously set “20 MINUTES INTO THE FUTURE”, as each movie is subtitled and as each episode of the TV series is introduced.

Dark Angel, on the other hand, commenced screening in 2000 and is quite explicitly set in 2019. It refers back to the events of 2009; primarily involving Max and her teammates’ (part of the X-5 series) escape from the secret Manticore program.

What these two science-fictional universe most strongly share is their urban setting. A city divided into sectors. A city broken. A once functional civilisation, post-Collapse.

Citizens hustling in makeshift markets. Burnt out cars left abandoned on the roadside.

People gathered around stacks of TVs in a ruined landscape.

The rebels of Max Headroom‘s world are the Blanks. Punk kids, subversives and alternative types that want out of the system, erasing themselves the central computers.

By contrast, in that other Max’s world, people are struggling to be re-inserted into the system. Especially those requiring or owed Government benefits. One episode features the rebel group S1W raiding a Veteran’s office; seizing control of its computer and entering in their data – which was being stalled by officials demanding bribes.

This is just one of the aspects of the Surveillance State that these two universes examine.

The Setting & Depiction of the Future

It’s the depiction of the Future that instantly dates Max Headroom on watching it today.

Using then cutting-edge technology, the poorly rendered – by contemporary standards – character of Max Headroom could probably be out-done today by a talented child.

The Controller’s computers display everything in wire-frame, or is otherwise simply rendered.

There is no Internet, which existed then so could have been used, but was then a purely Military and Academic technology.

Instead, all hacking was of broadcast signals. Yet, as Annalee on io9 shows, it also remains stunningly prophetic especially for her.

The dystopia is almost purely social. A world of “zombies” addicted to their televisions and fast food.  A Consumer Nightmare! It’s explicitly stated in one episode that nothing new is built anymore, everything is recycled. Nearly all creativity is gone, it’s a world in a  race to the bottom. The only new sports are descents into further brutality and barbarism; people demanding the death of the competitors.

Yet an active space program is one thing that is referred to. Something that – with a then brand new Space Shuttle fleet – was clearly considered  to be an inevitable feature of the near future. This was the era of Reagan’s Star Wars program. Space was the place (for the military especially).

One of the few technological innovations shown is the baby “grobag”. Bringing a fetus to term inside a nutrient bag, with some degree of control of its features; gender for example. This is pitched as perfect for the upwardly mobile couple, wanting an instant family; ie Yuppies, scorn/native of the 80s.

And, of course, the famous Blipverts…  advertisements with information so compressed that they caused some people to explode on viewing them. 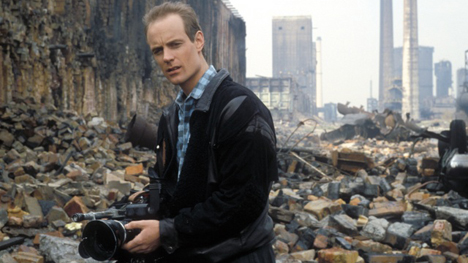 It’s also far from an environmental utopia. Rubbish pollutes the streets that aren’t already reduced to rubble. Smog the skies. Edison travels everywhere not in a flying car, but in a helicopter.

In short, few people would want to live in the world of Max Headroom.

Dark Angel‘s setting is pure post-Apocalypse, but of the Information Economy variety. In the world it takes place in the United States has suffered an EMP bomb attack that has wiped the country’s computers, taking them back to a new Dark Age (much like the end of Escape from LA).

Its broken world is more believable, especially as the US still teeters on the edge of another economic depression.

One my favourite lines in the show is Max’s narration in the pilot that:

“they call this a New Depression, but no one seems that depressed to me…”

Progress is shown to be still occurring outside the US.

The Steelheads – the most cyberpunk element of the Dark Angel universe, a subculture of body-mod enthusiasts – import a cyborg arm from (of course) Japan, for instance.

With that millennial focus on genetic engineering – something we’re still calling the NextBigThing, 10 years later – the transgenic super-soldiers are the main objects of Futurity. They are depicted using sped-up film and standard fight choreography in a way that doesn’t really horribly date the show at all;  especially when compared to that mid-1970s future-human show, The Six Million Dollar Man.

One thing that does date the show is its title sequence (even worse in season2).  Trim that down in a post-Lost style and you could easily screen this alongside Dollhouse.

It can be argued that recent events make it even more contemporary. Remember, this first screened pre-9/11. A 21stC state crippled by a terrorist attack was still pure speculation. By placing it in a post-Apocalypse, its use of contemporary technology doesn’t age it at all; it makes sense. Society is patched together from whatever functioning tech has survived. And what innovation that does take place appears to be driven purely by military or security needs.

The sweet exoskeleton Logan ends up with is explicitly said to have been salvaged from a warehouse. Despite them being rare at the the time, a few LCD monitors (vs the then standard CRT) appear.

It, like Hackers, uses pagers as the main means of mobile communications. But, again, this is easily rationalized.

Perhaps the main thing to date it is its signature use of barcode tattoos; another key cyberpunk signifier of a future past. 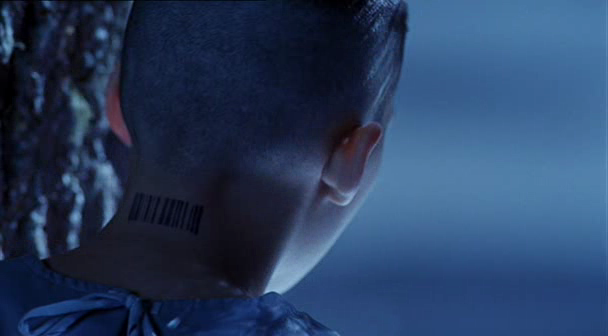 Extrapolating from today, if we wanted code humans like objects we’d use RFID chips. Or just be constantly tracked through an ever more inescapable CCTV network via facial and gait recognition and the constant data shadow our devices make.

Judging by the number of people that did go out and get barcode tattoos though, a lot of people would appear to be happy to live in the world of the Dark Angel.

Lessons for Conjuring a Future

Focusing on the positives from both shows we can now draw some conclusions on the some of the best ways to depict a believable future.

Don’t make too linear a projection of technology. Project, but allow a bit of drift and some imagination. As Annalee points out, Max Headroom predicted much of the state of today. It did so by imagining the social and cultural implications of the technology of the time. This is science-fiction at its best. Not what does the Future look like, but also how does it feel? What problems does technological change solve? What new ones does it create? This can be the source of drama.

The further you extrapolate ahead, the less the technology of the present should appear. The Fountain‘s spaceship is possibly the best Clarkean futuretech-as-magic I have seen in recent TV or film. It’s just a guy sitting by a tree in a giant bubble floating through space.  Brilliant!

Be wary of including that Future which seems most imminent. Max Headroom alluding to a functional space program is a piece of the future lost. Largely due to the Challenger disaster, but also the collapse of the Soviet Union took out the race from space. Two events nobody in that writing room would ever have reasonably expected.

The year 2000 was the era of the DotBoom at its peak; a linear projection for there would’ve been of a fully wired world. Yet it’s exactly its post-Apocalyptic setting that keeps Dark Angel contemporary.

What this also does mean though is to avoid the Singularity. Not because it’s un-writeable, but because… let’s face it, with reasonable historical knowledge about humanity’s twists and turns, it’s really not that probable. Something else will almost certainly happen in the interim to surprise us.

A sit-com about a person and their sentient appliances does have its appeal; but it’s also basically The Jetsons.

Dark Angel teaches us to cheat. Hide the Objects of Futurity inside Objects of the Present as much as possible. The X-5‘s are designed to pass among humanity, so they require little fancy make-up or props to depict, just a talented actor and some good costuming.

How would I pitch a truly Futuristic series, a show that would rock my socks off? I have some ideas. It may look something like L5, which I’m very impressed with so far.

To begin with though, it’s important to identity what does and doesn’t work (and holds true over time) in other shows.  This post is part of that process.

102 thoughts on “Depicting the Future: Max Headroom vs Dark Angel”