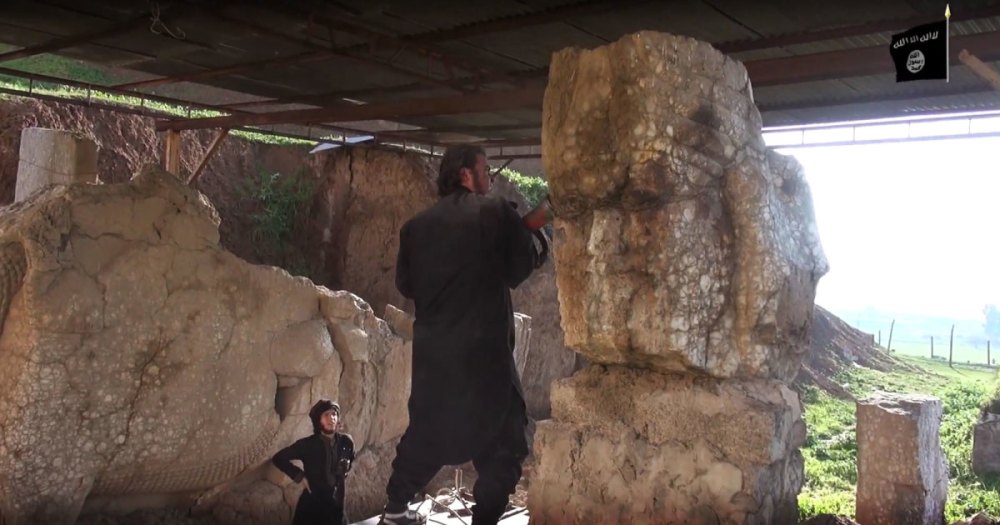 It does something to our sense of ourselves, and of humanity, when we see pictures of men, willfully and with impunity, destroying some of the world’s oldest and rarest archeological treasures. A couple of weeks ago, it was video clips of the Islamic State in Iraq and al-Sham’s extremists wielding sledgehammers and drills, methodically destroying an exquisitely carved stone lamassu, or winged man-bull, at the Assyrian complex of Nimrud, which was created by artists nearly three thousand years ago. A few days later, it was the ancient temple complex of Hatra, in northern Iraq, which was built by the Seleucid Empire around two or three centuries before Christ. Hatra had been the site of a series of glorious colonnaded buildings and statues; it is reported that beginning on March 7th, ISIS destroyed what was left of them. On Monday, there were new images on social media showing ISIS extremists attacking the grounds of St. George’s, a centuries-old Chaldean Catholic monastery outside of Mosul. In this world of all-seeing, all-hearing killer drones, these acts somehow continue.

All around the Middle East, archeological treasures of the ancient world have been stripped of their original glory—often, of what some call graven images.ISIS’s fanatics do so hatefully, as if to spite all others, but they are not the only perpetrators. Muslim extremists have long sought to destroy the physical evidence that any other faith worth valuing existed before their own. In March, 2001, the Afghan Taliban announced to the world that they would destroy the ancient, giant Buddhas of Bamiyan, and then, using explosives and artillery, proceeded to do just that. In the last decade, the Saudis, as the keepers of the Muslim holy places, have razed hundreds of historic sites in the cities of Mecca and Medina to make way for new construction, including shopping malls and hotels.

On a recent trip to Libya, I revisited the ancient Greco-Roman temple complex of Cyrene, overlooking the Mediterranean Sea. I had been there three years ago while Qaddafi was still in power. Most of the statues had already been defaced, but some had their human countenances still intact. On this return trip, on a line of pillars topped by bas reliefs showing the faces of gods, there were signs of even more recent vandalism, and a spray-painted message on the stone wall condemning idol worship. There were no guards that I could see. That evening, I spoke to Ahmed Hussein, who was recently named head of the Department of Antiquities (in one of Libya’s rival governments, anyway), and who attributed the damage to a band of footloose “local boys.” Even without interference from extremists, Cyrene was already succumbing to these casual forms of vandalism and to land grabbers who have been bulldozing sites to build cement-block houses around the edges of the temple complex. “The biggest threat we face is from the mentality of the local people, who don’t realize the economic value Cyrene has for us through tourism,” Hussein said. I pointed out that the city of Derna, which then, as now, was in the hands of ISIS extremists, lay only a short distance down the coast from Cyrene. Hussein acknowledged worryingly that that they “might come here.” He said, “We must be ready, because if they come, it will be like Iraq.”

via ISIS and the Destruction of History – The New Yorker