This is a re-release of my deep reading of the film Pacific Rim– originally published on the now defunct website, Grinding.be, October 22nd, 2013.

It looks at the pro-Borg aspects of the Jaeger and how they relate to posthuman sexuality. It examines some metaphorical aspects of the Kaiju – as stand-ins for the State and other forces terribly terraforming the Earth.

Pacific Rim is many things. Many shiny, spectacular, immersive, self-aware, monster genre mashing, robot smashing, crowd pleasing, city destroying, heroic dancing things. But apart from its surface appeal, it’s also the delivery system for some incredibly out there, subversive and challenging ideas. This may just be my reading of it, and that’s fine. But I suspect Guillermo Del Toro is guilty of being a clever, clever human and knew exactly what he was doing with this blockbuster movie.

Allow me to explain my thinking here. This is not a review. It’s a “User Guide for Humans”, from barely opened, posthuman eyes. This is an analog mind-meld… I mean drift; an English language word sequence as slow-boot brain update. Are you ready to accept Singularity?

Taken at face value, Pacific Rim is… completely absurd. If that wasn’t immediately apparent from its premise, it’s clear by halfway through the film that’s it’s winking at you hard.

It’s shouting at you with Idris Elba’s mandatory “the apocalypse is cancelled” speech at the climax. That amazing actor barely containing the joy on his face in getting to deliver an epic line like this. Pure man-child bliss… just the kind of thing you might expect to find in a mech suit vs kaiju fightfest.

Now, those of the Otaku-bent might want to do a detailed analysis of the origins, influences and details of Pacific Rim, and that’s exactly what this post  has done, if you want it [Thx for reading, see ya]. 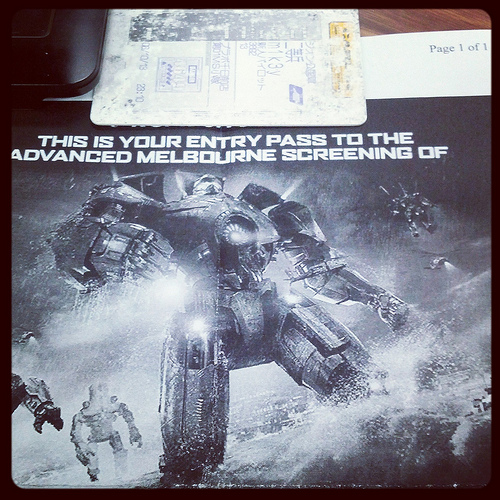 I’m not anti-Otaku. Hell, I raced home as a kid to watch Robotech, and collected what Transformers I could afford. When I toured Japan in ’09 I stumbled onto the Mobile Suit Gundam arcade game and played it every day I was there. I clutched my pilot card when I walked into the preview screening of Pacific Rim, and wore the pirate Neon Genesis Evangelion tee I picked up in a store in Akihabara.

I have been absolutely psyched for this film, and its complement Elysium, all damn year.

What I am saying is there’s a lot more going on below the surface of Pacific Rim. Just don’t expect it to cohere into a logical whole.

First, we have the “dance-dance pilot systems”. With its shiny video game aesthetics, and dramatic engine plot device, it is first and foremost pro-Borg; celebrating the union of more than one human conscious into a greater whole. There’s been a lot of Borg-hate going on since Google Glass dropped into the world, and I’m looking mostly at Stop the Cyborgs.

Mind you, I walked into this movie with my head having been resident inside in Ramez Naam’s Nexus’verse for a good month. One of the elements of that future world is human hate of anything group-mind (not unlike the linear future world of the Star Trek-verse’s Federation), following various terrorist attacks and cult fiascos.  So to immediately recognise that there were Borg heroes, front and centre in this film was yet another joyful moment.

Then we have the Robo/Borgsexuality.

Drift With Me: Posthuman Gender & Robosexuality

…which brings us to the giant confusion of posthuman gender. Because what does that even look like from a human perspective? Maybe it’s two buff guys in shiny suits merging through a shared childhood to form a union with a rocket punching, sock’em bot? Maybe it’s also some weird, ritualised staff fighting sequence that isn’t a romantic, courtship sequence… because that would make the two brothers incestuous and homoerotic and is anyone else getting uncomfortable thinking deeply about this?

Let’s cut to the heroic scientist “drifting” with a random chunk of giant alien brain… why on Earth would a Kaiju fanboy ever be turned on by humongous glial cells of extra-dimensional origin?

“you want subversion on a massive level…“ 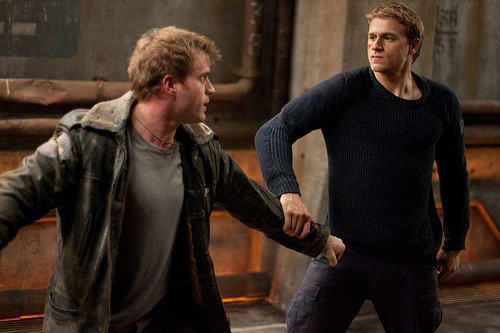 Those of us raised on Robotech also obsessively watched Top Gun as teens. Hell, my gaming nick was Maverick for much of my youth. So the reconciliation scene at the end of Pacific Rim, the begrudging acceptance of the owner of worst Aussie accent ever and our hero… this is totally recapitulating Top Gun.

Make what you will of the fact that I really hope we get to see the bulldog don a mech suit and borg it up with friendly, genetically engineered Kaiju in a future sequel. Plot that on your human linear Kinsey scale! 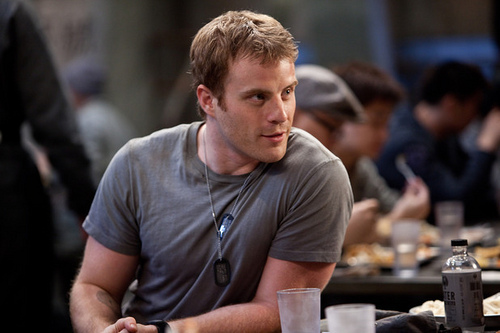 Move over Seven of Nine, the new borg sexiness is definitely here.

Once you’ve accepted that, incorporating the literal realisation of the “city as a battlesuit [Matt Jones’ guest post on io9]” is not a stretch of the brain meats at all. The mech suit as embodiment of the merger of humanity and its infrastructure. Enter the champions of the Anthropocene!

Made inarguably explicit when you’ve got ships being used as baseball bats and “Gipsy Danger [using] shipping containers like brass knuckles”:

Each Jaeger is built to defend a city, but they go beyond having some local flavour to the point of merging with their environment.

As Matt Jones quotes from a British architecture journal in his piece:

While Batman’s Gotham City and Superman’s Metropolis largely reflect the character of the superheroes who inhabit them (Gotham is grim, Metropolis shines)

…going on to demonstrate how one of the heroes of the comic book The Authority takes this idea to the next level, foreshadowing the nature of our Anthropocene Champions:

“Hawksmoor defeats the giant, monstrous sentient city by wrapping himself in Tokyo to form a massive concrete battlesuit.”

Each Jaegar then is a posthuman defence system with local characteristics. 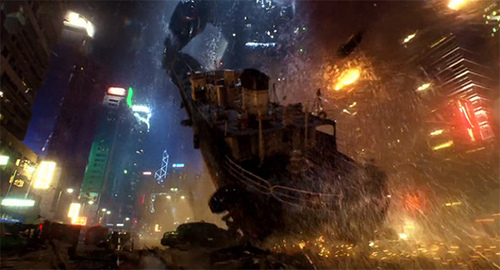 While we’re stretching that long bow, let’s add also that the argument that it also represents a recapitulation of one Earth’s oldest tales: Marduk the City God vs the Serpent. The Jaeger as the City become God-like… and if the Kaiju aren’t the contemporary incarnation of the “monster of primeval chaos,” then what is?

“It’s not Posthuman without going Post-State”

It’s not a posthuman tale without things going post-state. The foolish, political baseline human types gripped by their illusions of control decide that building a giant wall trends much better in the polls, and it’s within that construction effort that we find our hero lurking at the film’s commencement.

The ever pragmatic, military leader, Idris Elba (TV’s Luther), unencumbered by the requisite trope of giant wall of video-screened suits ordering him turns to… “extra-legal funding sources”, continuing the rescue mission by any means necessary.

In this case, dealing with a bizarre caricature of a bad guy with great shoes; the hybrid Spy Kids enemy / Bond Villain. (Ranking the film just above Contact on my personal Top 10: “Projects funded by an absolute Bond Villain?” list)

But let’s not miss the another metaphor of the real villains; the Kaiju themselves. Thomas Hobbes famously described the State as a Leviathan. What better way to portray the entities that have really destroyed the climate of this planet for their own ends? What more apt depiction of rogue geoengineers – than as giant monsters?!?! It’s definitely how the various manifestations of corporate-democratic empire looks to the rest of the world.

This is the most subversive element of all, snuck into the subconscious of the audience by a gigantic popcorn flick by a Mexican director. Perhaps no surprise then that the film did terribly in the US, but made serious bank globally. 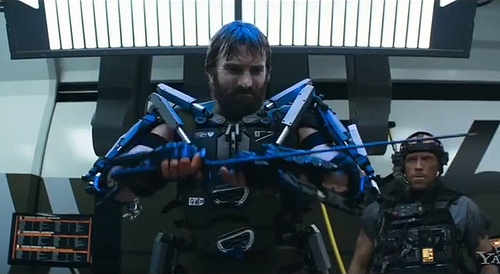 Maybe it’ll take the US a decade or so to appreciate it – as critics are just now accepting Southland Tales – but, when you’re watching Elysium and wondering why Super Soldiers of the Shadow State are battling with swords and chainsaws against some mech’ed up gangsters over the right of a Breakaway Civilisation to exist, remember that Ron Perlman probably said it best in the post-credits scene:

“Where is my other shoe?”

When will it drop?

Disproving its antecedent film on things that lurk in the cracks of the earth, beneath the waves, The Abyss: “They want us to grow up a bit, and put away childish things. Of course, it’s just a suggestion.”

With Del Toro it’s posthuman man-children dancing dancing off to the rescue, and that’s just super by me.

2 thoughts on “The Many Posthuman Aspects of Pacific Rim [Re-Released & Remastered from the Grinding.Be archives]”