“This is just the beginning,” Hunteman said. The advanced hackers who built Stuxnet “did all the hard work,” and now the pathways and methods they developed are going to filter out to the much larger group of less talented coders. Copycats will follow.

If you’re not moved by the scale of the disaster and its aftermath, consider that our future security is inextricably bound up with the future for Pakistan. Of 175 million Pakistanis, some 100 million are under age 25. In the years ahead they’ll either opt for gainful employment or, in its absence, may choose Islamic extremism.

Right now, Islamic insurgents are using the chaos as an opportunity, attacking police posts in Pakistan’s northwest while police have been occupied in rescue and relief work. Meanwhile, lacking help and losing hope, many Pakistanis are becoming increasingly hostile toward President Asif Ali Zardari.

Robert Reich (Why The Unfolding Disaster in Pakistan Should Concern You)

Googlezon is redefining the internet as a tiered service, like cable. And this new thing called the public internet is the lowest tier. Kind of like network television is the lowest tier in your television service options. From here on out, you will start to see the internet equivalent of cable service online: For an extra ten dollars, you can get the “movie lovers” package, where your ISP privileges Netflix and Hulu traffic, giving them to you super-fast. For another ten dollars, you can get the “concerned parent” package, which blocks peer-to-peer traffic as well as websites that they consider to be pornographic. And so on.

In their proposal, they say that it’s perfectly OK for companies and consumers to buy non-neutral, non-public “special services” online. If you’re a media company that streams videogames, for example, your customers want a guarantee that the game won’t stall out because of a crappy “public internet” connection. So you make your game available only to people with the special service “gamer package.” Your customers pay you; you pay Googlezon; now there’s a superfast connection for the privileged few with money to burn.

And what happens when news websites start delivering their pretty pictures and infographics in 3D? Verizon has already suggested 3D is a perfect “special service” to deliver in a non-neutral way. In five years, the public internet is going to look boring and obsolete. Where’s the 3D? Where are all the cool games and streaming viddies? The public internet? Yeah, that’s just for poor people.

But guess what’s going to remain on the public net, the place where you go when you don’t have money? Certainly there will be educational resources like Wikipedia. But mostly it’s going to be advertisement-saturated free content from major entertainment companies. And of course there will be many opportunities to give your personal information to Facebook, or gamble away your non-existent savings on Zynga games. (Sorry – did I say gamble? I meant “pay for premium poker game content.”) Put in brick-and-mortar terms: There won’t be any produce markets on the public internet, but there will be plenty of liquor stores.

The government has been consulting with the internet industry over the proposal, which would require ISPs to store certain internet activities of all Australians – regardless of whether they have been suspected of wrongdoing – for law-enforcement agencies to access.

All parties to the consultations have been sworn to secrecy.

(via Government backs away from web snooping plans)

– a secret plan with censored document to store unknown information…. for our own protection.  because, you know, CHILD PR0N!!!!!!11111  fuck.this.shit

According to the Environment Ministry in Berlin, almost €425,000 ($555,000) was paid out to hunters in 2009 in compensation for wild boar meat that was too contaminated by radiation to be sold for consumption. That total is more than four times higher than compensation payments made in 2007.

The reason for the climbing payments, of course, has more to do with Germany’s skyrocketing wild boar population than with an increase in radioactive contamination. “In the last couple of years, wild boar have rapidly multiplied,” a spokesman from the Environment Ministry confirmed to SPIEGEL ONLINE. “Not only is there more corn being farmed, but warmer winters have also contributed to a boar boom.”

Numbers from the German Hunting Federation confirm the population increase. In the 2008/2009 season, a record number of boar were shot, almost 650,000 against just 287,000 a year previously.

Many of the boar that are killed land on the plates of diners across Germany, but it is forbidden to sell meat containing high levels of radioactive caesium-137 – any animals showing contamination levels higher than 600 becquerel per kilogram must be disposed of. But in some areas of Germany, particularly in the south, wild boar routinely show much higher levels of contamination. According to the Environment Ministry, the average contamination for boar shot in Bayerischer Wald, a forested region on the Bavarian border with the Czech Republic, was 7,000 becquerel per kilogram. Other regions in southern Germany aren’t much better.

Germany’s Atomic Energy Law, which regulates the use of nuclear energy in the country, mandates that the government in Berlin pay compensation to hunters who harvest contaminated animals.

Wild boar are particularly susceptible to radioactive contamination due to their predilection for chomping on mushrooms and truffles, which are particularly efficient at absorbing radioactivity. Indeed, whereas radioactivity in some vegetation is expected to continue declining, the contamination of some types of mushrooms and truffles will likely remain the same, and may even rise slightly – even a quarter century after the Chernobyl accident.

“In the regions where it is particularly problematic, all boar that are shot are checked for radiation,” reports Andreas Leppmann, from the German Hunting Federation. There are 70 measuring stations in Bavaria alone.

In addition, for the last year and a half, Bavarian hunters have been testing ways to reduce the amount of caesium-137 absorbed by wild boar. A chemical mixture known as Giese salt, when ingested, has been shown to accelerate the excretion of the radioactive substance. Giese salt, also known as AFCF, is a caesium binder and has been used successfully to reduce radiation in farm animals after Chernobyl. According to Joachim Reddemann, an expert on radioactivity in wild boar with the Bavarian Hunting Federation, a pilot program in Bavaria that started a year and a half ago has managed to significantly reduce the number of contaminated animals.

Government compensation payments to hunters remain a small part of the €238 million recompense the German government has shelled out for damages relating to Chernobyl since reactor IV exploded on April 26, 1986. Furthermore, there is some relief in sight. Even as wild boar continue to show a fondness for making the headlines, the recent hard winter has had its effect on population numbers. So far this year, Berlin has only had to pay out €130,000 for radioactive boar.

But radioactivity in wild boar isn’t likely to disappear soon. “The problem has been at a high level for a long time,” says Reddemann. “It will likely remain that way for at least the next 50 years.”

(via A Quarter Century after Chernobyl: Radioactive Boar on the Rise in Germany – SPIEGEL ONLINE – News – International) 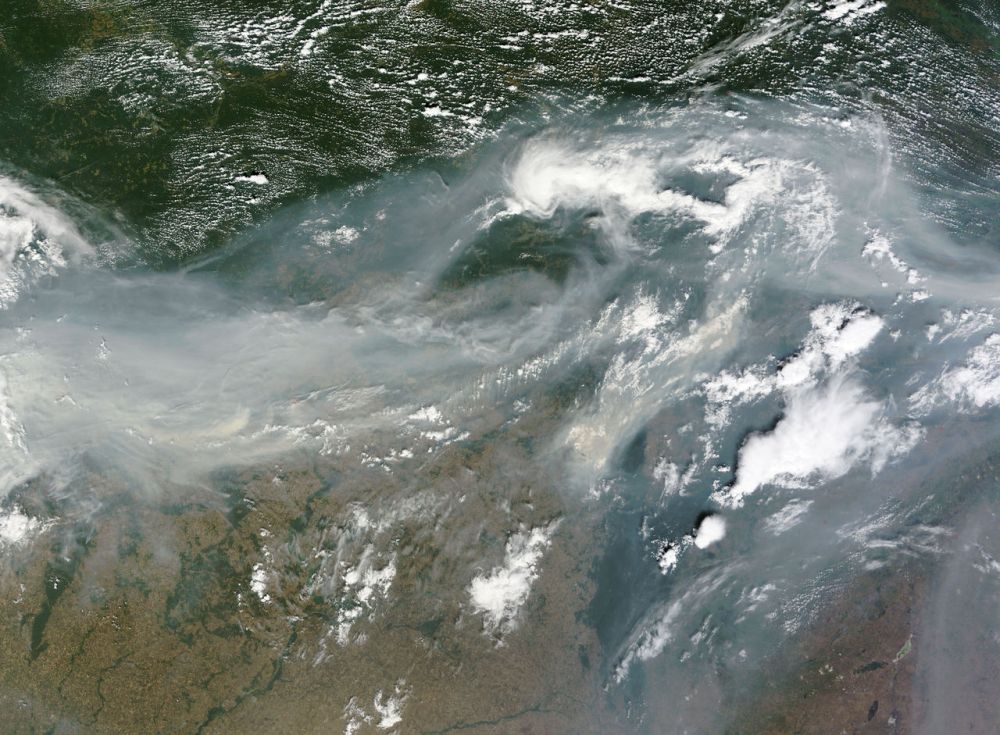 The fires ignited in late July and early August as record heat combined with drought turned plants tinder dry. Nearly 700 fires burned on August 2, reported CNN, burning homes, killing at least 34 people, and pushing about 500 towns and villages into a state of emergency. The western half of the impacted region is shown in this image. One of the worst hit communities, Nizhny Novgorod, is beneath the dense smoke on the left side of the image. The city’s approximate location is marked. (via Smoke over Western Russia : Natural Hazards)

Experts said the wave of supercharged gas will likely reach the Earth on Tuesday, when it will buffet the natural magnetic shield protecting Earth.

It is likely to spark spectacular displays of the aurora or northern and southern lights.

“This eruption is directed right at us,” said Leon Golub, of the Harvard-Smithsonian Center for Astrophysics (CfA).

“It’s the first major Earth-directed eruption in quite some time.”

Scientists have warned that a really big solar eruption could destroy satellites and wreck power and communications grids around the globe if it happened today.

“This was a very rare event – not one, but two almost simultaneous eruptions from different locations on the sun were launched toward the Earth.

“These eruptions occur when immense magnetic structures in the solar atmosphere lose their stability and can no longer be held down by the Sun’s huge gravitational pull. Just like a coiled spring suddenly being released, they erupt into space.”

She added: "It looks like the first eruption was so large that it changed the magnetic fields throughout half the Sun’s visible atmosphere and provided the right conditions for the second eruption.

"Both eruptions could be Earth-directed but may be travelling at different speeds.

“This means we have a very good chance of seeing major and prolonged effects, such as the northern lights at low latitudes.”

Amusing Ourselves to Death by Stuart McMillen – cartoon Recombinant Records