Long-range communication stones are palm-sized, triangular devices with rounded edges and intricate designs on the top. They work by forming a psychic link to the last person to make physical contact with them. A second link is established with a nearby stone if applicable, allowing the two users to share thoughts, either conscious or not. The link from the stone to its user requires close range, not being able to extend much further than an adjacent room, but the link between two stones has much greater range, at least a few thousand miles.

In physics, nonlocality or action at a distance is the direct interaction of two objects that are separated in space with no perceivable intermediate agency or mechanism. Regarding the unexplained nature of gravity, Isaac Newton (1642-1727) considered action-at-a-distance “so great an Absurdity that I believe no Man who has in philosophical Matters a competent Faculty of thinking can ever fall into it”. Quantum nonlocality refers to what Einstein called the “spooky action at a distance” of quantum entanglement.

The starting point for McFadden and Pockett’s theory is the fact that every time a neuron fires to generate an action potential, and a postsynaptic potential in the next neuron down the line, it also generates a disturbance in the surrounding electromagnetic field. McFadden has proposed that the brain’s electromagnetic field creates a representation of the information in the neurons. Studies undertaken towards the end of the 20th century are argued to have shown that conscious experience correlates not with the number of neurons firing, but with the synchrony of that firing.[9] McFadden views the brain’s electromagnetic field as arising from the induced EM field of neurons. The synchronous firing of neurons is, in this theory, argued to amplify the influence of the brain’s EM field fluctuations to a much greater extent than would be possible with the unsynchronized firing of neurons.

McFadden thinks that the EM field could influence the brain in a number of ways. Redistribution of ions could modulate neuronal activity, given that voltage-gated ion channels are a key element in the progress of axon spikes. Neuronal firing is argued to be sensitive to the variation of as little as one millivolt across the cell membrane, or the involvement of a single extra ion channel. Transcranial magnetic stimulation is similarly argued to have demonstrated that weak EM fields can influence brain activity.[citation needed]

McFadden proposes that the digital information from neurons is integrated to form a conscious electromagnetic information (cemi) field in the brain. Consciousness is suggested to be the component of this field that is transmitted back to neurons, and communicates its state externally. Thoughts are viewed as electromagnetic representations of neuronal information, and the experience of free will in our choice of actions is argued to be our subjective experience of the cemi field acting on our neurons.

McFadden’s view of freewill is deterministic. Neurons generate patterns in the EM field, which in turn modulate the firing of particular neurons. There is only conscious agency in the sense that the field or its download to neurons is conscious, but the processes of the brain themselves are driven by deterministic electromagnetic interactions. The feel of subjective experience or qualia corresponds to a particular configuration of the cemi field. This field representation is in this theory argued to integrate parts into a whole that has meaning, so a face is not seen as a random collection of features, but as somebody’s face. The integration of information in the field is also suggested to resolve the binding/combination problem.

In 2013, McFadden published two updates to the theory. In the first, ‘The CEMI Field Theory: Closing the Loop’ [10] McFadden cites recent experiments in the laboratories of Christof Koch[11] and David McCormick[12] which demonstrate that external EM fields, that simulate the brain’s endogenous EM fields, influence neuronal firing patterns within brain slices. The findings are consistent with a prediction of the cemi field theory that the brain’s endogenous EM field – consciousness – influences brain function. In the second, ‘The CEMI Field Theory Gestalt Information and the Meaning of Meaning’,[13] McFadden claims that that the cemi field theory provides a solution to the binding problem of how complex information is unified within ideas to provide meaning: the brain’s EM field unifies the information encoded in millions of disparate neurons.

Susan Pockett[1] has advanced a theory, which has a similar physical basis to McFadden’s, with consciousness seen as identical to certain spatiotemporal patterns of the EM field. However, whereas McFadden argues that his deterministic interpretation of the EM field is not out-of-line with mainstream thinking, Pockett suggests that the EM field comprises a universal consciousness that experiences the sensations, perceptions, thoughts and emotions of every conscious being in the universe. However, while McFadden thinks that the field is causal for actions, albeit deterministically, Pockett does not see the field as causal for our actions.

Among his early influences Sheldrake cites The Structure of Scientific Revolutions by Thomas Kuhn. Sheldrake says the book led him to view contemporary scientific understanding of life as a paradigm, which he called “the mechanistic theory of life”. Reading Kuhn’s work, Sheldrake says, fixed his focus on how scientific paradigms can change.[7]

Although there are similarities between morphic resonance and Hinduism’s akashic records,[114] Sheldrake says he first conceived of the idea while at Cambridge, before his travel to India where he would later develop it. He attributes the origin of his morphic resonance idea to two influences: his studies of the holistic tradition in biology, and French philosopher Henri Bergson’s book Matter and Memory. He says he took Bergson’s concept of memories not being materially embedded in the brain and generalised it to morphic resonance, where memories are not only immaterial but also under the influence of the collective past memories of similar organisms. While his colleagues at Cambridge were not receptive to the idea, Sheldrake found the opposite to be true in India. He recounts his Indian colleagues saying, “There’s nothing new in this, it was all known millennia ago to the ancient rishis.” Sheldrake thus characterises morphic resonance as a convergence between Western and Eastern thought, having originated in the West and developed in the East.[6][115]

Sheldrake has also noted similarities between morphic resonance and Carl Jung’s collective unconscious with regard to collective memories being shared across individuals and to the coalescing of particular behaviours through repetition, described by Jung as archetypes.[6] However, where Jung assumed archetypal forms were transmitted through physical inheritance, Sheldrake attributes collective memories to morphic resonance and rejects any explanation of them involving what he terms “mechanistic biology”.[10] 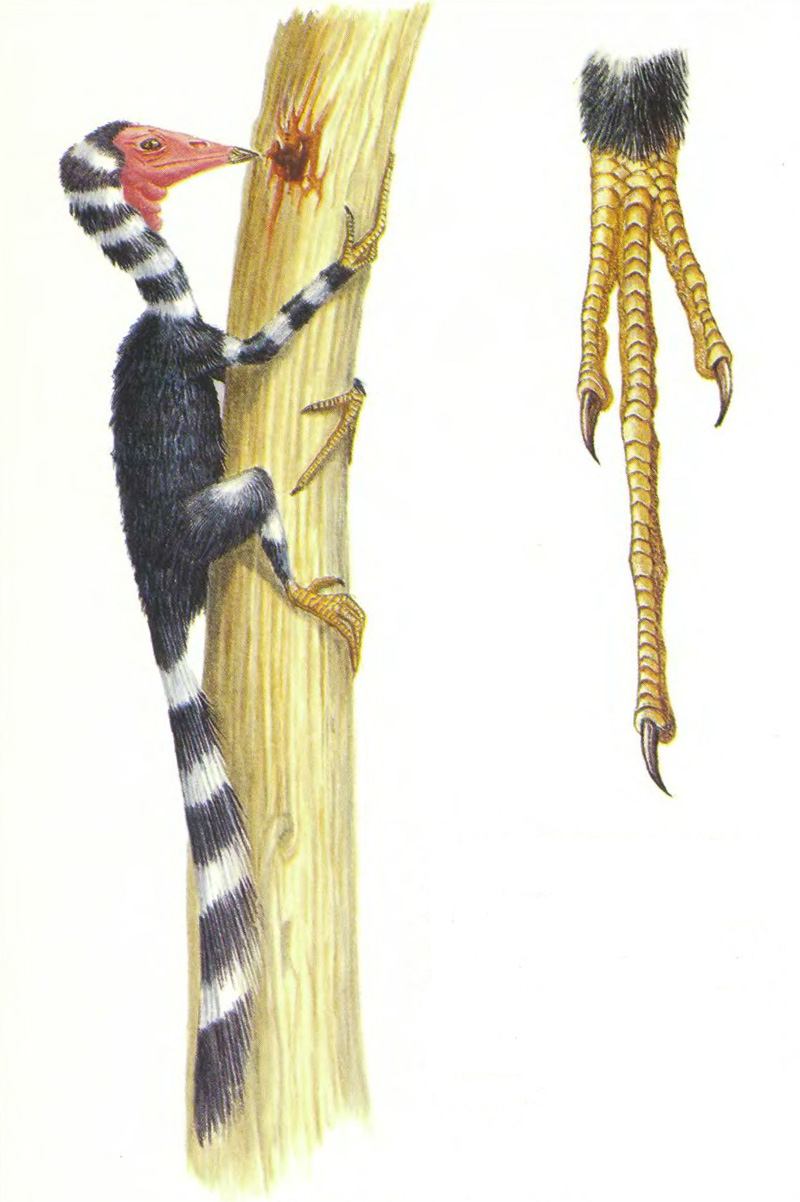 The tree-dwelling dinosaur Dixon dubbed the “Nauger” was unlike any known dinosaur. Part woodpecker and part aye-aye, this dinosaur pecked holes in trees in order to snatch grubs with a specialized, elongated finger, but in 2002 two different teams of paleontologists described two specimens of a strikingly similar dinosaur. Known as Scansoriopteryx, this tiny dinosaur possessed a ludicrously elongated third finger, and a paper by a team of Chinese Academy of Sciences paleontologists led by Fucheng Zhang suggested that this dinosaur may have been using this digit to skewer insect larvae much like the aye-aye and Dixon’s hypothetical “Nauger.” These scientists also proposed that Scansoriopteryx may have been one of the few arboreal dinosaurs, although the paleobiology of this creature has not been thoroughly studied yet (via “Alternative Evolution” of Dinosaurs Foresaw Contemporary Paleo Finds [Slide Show]: Scientific American Slideshows http://www.scientificamerican.com/article.cfm?id=alternative-evolution-dinosaurs-foresaw-contemporary-paleo)