At first glance, the swirls do not appear to be related to large impact craters or any other topography. ‘They simply look as if someone had finger-painted the surface,’ Schultz said. ‘There has been an intense debate about what causes these features.’

In the 1970s, scientists discovered that many of the swirls were associated with anomalies of the moon’s crustal magnetic field. That revelation led to one hypothesis for how the swirls may have formed. Rocks below the surface in those spots might contain remanent magnetism from early in the moon’s history, when its magnetic field was much stronger than it is now. It had been proposed that those strong, locally trapped magnetic fields deflect the onslaught of the solar wind, which was thought to slowly darken the moon’s surface. The swirls would remain brighter than the surrounding soil because of those magnetic shields.

But Schultz had a different idea for how the swirls may form – one that has its roots in watching the lunar modules land on the moon during the Apollo program.

‘You could see that the whole area around the lunar modules was smooth and bright because of the gas from the engines scoured the surface,’ Schultz said. ‘That was part of what got me started thinking comet impacts could cause the swirls.’ 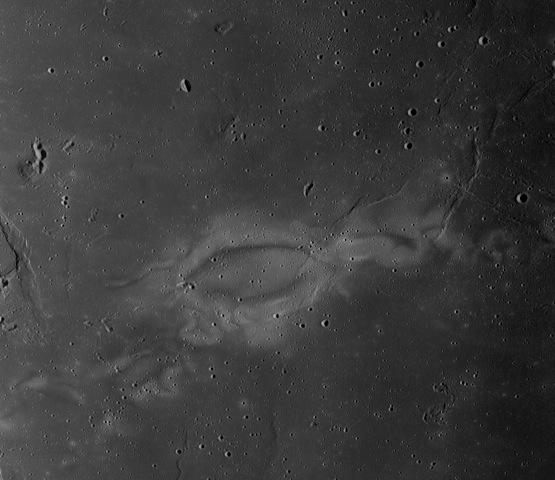 Comets carry their own gaseous atmosphere called a coma. Schultz thought that when small comets slam into the moon’s surface – as they occasionally do – the coma may scour away loose soil from the surface, not unlike the gas from the lunar modules. That scouring may produce the bright swirls.

Schultz first published a paper outlining the idea in the journal Nature in 1980. That paper focused on how the scouring of the delicate upper layer of lunar soils could produce brightness consistent with the swirls. The structure of the grains in the upper layer (termed the ‘fairy castle structure’ because of the way grains stick together) scatters the sun’s rays, causing a dimmer and darker appearance. When this structure is stripped away, the remaining smoothed surface would be brighter than unaffected areas, especially when the sun’s rays strike it at certain angles. For Reiner Gamma on the lunar nearside, those areas appear brightest during the crescent moon just before sunrise.

As computer simulations of impact dynamics have gotten better, Schultz and Bruck-Syal decided it might be time to take a second look at whether comet impacts could produce that kind of scouring. Their new simulations showed that the impact of a comet coma plus its icy core would indeed have the effect of blowing away the smallest grains that sit atop the lunar soil. The simulations showed that the scoured area would stretch for perhaps thousands of kilometers from the impact point, consistent with the swirling streaks that extend across the moon’s surface. Eddies and vortices created by the gaseous impact would explain the swirls’ twisty, sinuous appearance.

The comet impact hypothesis could also explain the presence of magnetic anomalies near the swirls. The simulations showed that a comet impact would melt some of the tiny particles near the surface. When small, iron-rich particles are melted and then cooled, they record the presence of any magnetic field that may be present at the time. ‘Comets carry with them a magnetic field created by streaming charged particles that interact with the solar wind,’ Schultz said. ‘As the gas collides with the lunar surface, the cometary magnetic field becomes amplified and recorded in the small particles when they cool.’

Taken together, the results offer a more complete picture of how the swirls form, the researchers say.