Or how technological alienation, cultural stagnation and fucking robots will be the end of us all. On this planet. But might just see us reborn on the other side of the galaxy in five thousand years, give or take.

WARNING: PARTS OF THIS PROBABLY AREN’T SAFE FOR WORK (the clue might be in the title). I MEAN, IT DEPENDS WHERE YOU WORK… VARIOUS TRIGGER WARNINGS TOO. And… a significant spoiler for The Congress.

Our journey begins here – Illustrations Showing The Ugly Truth Of Today’s World – which gets me thinking about a lot of things (apart from just: this will make for a fine Feature Image):

Illustrator and animator, Steve Cutts, is changing the way we think about society through art…

Except what I’ve been thinking for ages is GAMER WAS RIGHT, and really this guy only just caught up.

Gamer is several things, but mostly it’s about various forms of technological alienation; escapism and control. And ultraviolence. And nanotech.

The ultimate prison break is the escape from escapism, back into the real – in all its rawly rendered horror.

There’s another movie that’s completely differently pitched but oh so similarly themed – being also about alienation, and supersaturated escapism… where humanity is slowly dying off, dreaming itself into oblivion – The Congress (warning again – major spoiler here):

Both of these films – one from the cranked out minds of Neveldine/Taylor, the other a French/Israeli art house movie – owe a great deal to that most popular modern technognostic rescue mission movie, The Matrix:

Coming back to the slightly more mundane but still highly science-fictional present, Jenka takes us all on a world tour of the various ways our technological progress and cultural attitudes are facilitating our species’ demise – far exceeding previous expectations that the levelling up of societies might just defuse the Neo-Malthusian Nightmare known as the Population Bomb – in An App For Love:

By maximizing efficiency, technology has transformed dating into a routine for the acquisition of sex. Love has been, literally, written out of the code for a generation afraid to catch feelings.

Tinder, and “apps for love”. Careers, and “catching feelings.” These are just some of the causes of a world where so much of the human population is now at sub-replacement fertility levels: 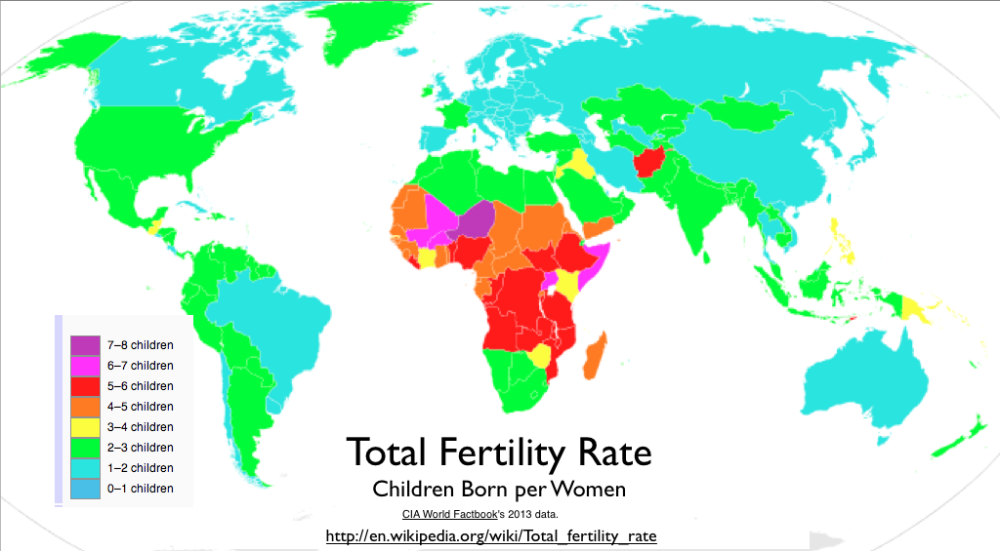 A very timely graphic to contemplate when vast chunks of the so-called Developed World are hastily erecting barriers to stop an imagined tsunami of people, an epic wave of migration – when just such a population boost is in fact what such declining cultures direly require.

To drive the point home – remember, you need a replacement rate of above 2 just to maintain the current population. The blue countries are the ones in the decline. They’re also mostly the ones building the walls right now. The green ones are stable, for the moment, but also just as fervently flirting with protectionism.

Whoever dies with the most toys wins, right?

Japan’s rate is currently 1.4, which is why they’re busy developing fuzzy wuzzy robots to look after their old people. (In other news: Japan’s ‘no immigration principle’ looking as solid as ever. DO YOU SEE?)

Meet Robear. It’s a high-tech teddy with a mission: helping make elderly care much easier in the future.

Time will be of the essence for any technology in this sector — a Japanese government research institute predicts that the country’s 127-million-strong population will decrease to around 116.62 million by 2030, 99.13 million in 2048, and 86.74 million by 2060, assuming medium birth and death rate projections. The need for elderly care will grow as the population shrinks.

A high tech country trying to invent its way, not out of extinction, just to a more orderly transition. Gently carried over the threshold. A whole culture on robot-assisted palliative care.

As The Breakthrough Institute write, explaining in detail why nearly all populations are trending this way – Population Bomb? So Wrong – How Electricity, Development, and TV Reduce Fertility:

India doesn’t need Tinder and sexual & emotional replacement devices for a significant drop in the fertility rate; TV ownership alone is enough. A fact that has not been broadcast across the West:

I suspect that the rapid drop in fertility in such countries as India and Brazil, as well as its association with television, has been missed in mainstream U.S. commentary in part because it flies in the face of deeply ingrained expectations. That television viewing would help generate demographic stabilization would have come as a shock to those who warned of the ticking global population bomb in the 1960s.

Many of these same critics regarded television as inauthentic, mind numbing, and thought controlling, and feared that by inculcating consumerism it would hasten environmental destruction. Jerry Mander’s 1978 book, Four Arguments for the Elimination of Television, was widely embraced by the green movement, and is still approvingly cited in such places as the “primitivist” blog Challenging Civilization. Mander argued not only that television singularly lacks democratic potential, but also that it functions to enhance autocratic control.

The things we fear rarely end up being the real threats. What motivated the greens and primitivists to relinquish technology are the same forces causing the Japanese to embrace it – to quote from the same article as earlier (emphasis mine):

Elite prejudices and public perceptions play a key role in shaping the policymaking process. The result is often policy that can appear irrational, or even contrary to the national interest.

TV alone could end up delivering the vastly reduced populations that primitivists and greens have long culled for – humanity at a sustainable level, in balance with a vastly diminished ecosystem. Another grim, static, cybernetic – technocratic – vision of our place in the world.

Whichever way you cut it, this is still how the future of human-machine coevolution looks, to many: just another path to our own extinction:

“In the case of radically transforming technologies, a better understanding of the transition dynamics from a human to a “posthuman” society is needed. Of particular importance is to know where the pitfalls are: the ways in which things could go terminally wrong.”

More accurately though, robots are just the dramatic, sexier face to put on our self-made, technologically facilitated annihilation. As I said to Matt Webb recently:

@genmon humans only have sex with robots, not each other. Game over man, game over.

We’re doing this all by ourselves, to ourselves. And we’ve come a long way – fallen so far – from that now meagre vision of the 1990s era collapse in community that was encapsulated by Bowling Alone…

Real Dolls have gone from being the plot device of an odd-ball indie film, to, well… its already being called “the new normcore” by some.

The extremely human-like doll was looking right at Mills, and it reminded him of the Twilight Zone episode where William Shatner comes face-to-face with a monster on an airplane wing.

Then he became aroused.

We are literally engineering our own extinction; embracing obsolescence. Our dying act being to perhaps build a new race to help us to our end, then mourn us. If we’re lucky.

Which isn’t to say we might not also be creating our own salvation in the process. In the posthuman era to come, death is not necessarily the end. Especially as it is written in the fictional future according to Charles Stross:

The setting of Saturn’s Children was the solar system. Homo sapiens was extinct, and all the characters were androids. In Neptune’s Brood, set in AD 7000, Homo sapiens has been resurrected three times, but it remains insignificant, and is known as the “Fragile”… The setting of Neptune’s Brood is the part of the galaxy that has since been colonized with slower than light travel.

So the Full Human Robot Galactic Civilisation I yearn for might still come about in the end – and I’m perfectly fine with us being the minority shareholders –  thousands of years from now… but what a tortuously long, roundabout way to go to get there!

To conclude then, I think Veronica in Heathers perhaps said it best:

OR… we could actively update our cultures, embrace the future – instead of walling ourselves off against the present –  and explore the cosmos together in our own lifetime.