Since I had to keep my review PG-rated, you get all these. 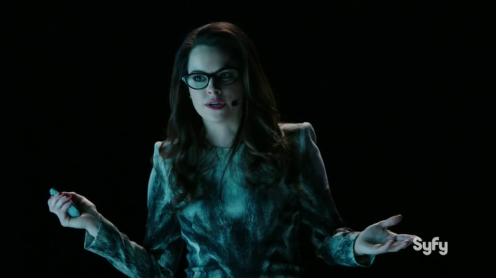 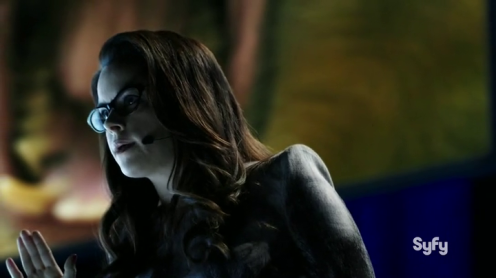 Jennifer Goine’s over the top and loving it DeExtinction speech in the 12 Monkeys finale.

My father created Markridge as a place to defy the order of things, to ignore the rules. To laugh at Mother Nature and spit in the face of Father Time.

Beginning today, Markridge will start repairing the damage that men like my father have done to this world. Through genetic manipulation we will give new birth to what man has so arrogantly made extinct. The lease is up. Time to give the world back to its rightful owners. The animals! The lions and tigers and bears… the furry faced caretakers…[inaudible]

THIS YEAR THE DODO, NEXT YEAR THE UNICORN!”

there’s your future right there, an angry libertarian with a shotgun and a dead drone. It ends as it began. With a message (taken directly and edited lightly from the fansubs):

[The] Climate summit ends. A large part of Environment Ministers is are dead now.

There, we killed them. Why?

We can not wait. We are pressed for time.

We can not let politicians sit in meeting after meeting –

We know that we [are heading] towards an environmental disaster.

Nevertheless, those with power and opportunities [do] nothing.

No country will be the first to undertake climate commitments.

We made sure that the old politicians disappeared.

Now there is room for new ministers.

Do not repeat the old mistakes.

The why done it of this show is clear from the beginning.

But the issues remain to be explored. Within the next season of the show. And without, from the world where we watch it.

The biggest question facing us today is: what cost humanity?

Does our survival trump that of all other species?

Does our continued existence mean the slow extinction of all other life except what we farm? The death of the wild?

To those that empathize more strongly with the citizens of the animal kingdom and call Gaia, Mother, our own near extinction seems justified. For the “greater good”, as they see it. Let the wild overrun civilization; a Deep Ecology Apocalypse.

Which puts the agents of the semi-fictional Overview Effect Enforcement Agency firmly on the middle path. Taking all reasonable action as “beyond good & evil” actors. Wake up the PowersThatBe, before we all live a true nightmare.

And who’s on the front line in our Scandinavian drama series? A mutant of sorts. A high functioning empath, rating somewhere on the human made Asperger’s Scale.

The eco-terrorists of the second season of Bron || Broen are in no way affiliated with the Overview Effect Enforcement Agency. They are certainly not ousted members. We have no knowledge of their actions or identity. Who is this anyway? I have to go now.

“You ever heard of something called membrane theory, detectives?” Cohle asks.

And so Professor Cohle begins to hold forth. "It’s like, in this universe, we process time linearly,” he says. “Forward. But outside of our space-time, from what would be a fourth-dimensional perspective, time wouldn’t exist. And from that vantage, could we attain it, we’d see"—he crushes a can of Lone Star between his palms—"our space-time look flattened, like a seamless sculpture. Matter in a super-position—every place it ever occupied. Our sentience just cycling through our lives like carts on a track. See, everything outside our dimension—that’s eternity. Eternity looking down on us. Now, to us, it’s a sphere. But to them, it’s a circle.”

Needless to say, Papania and Gilbough are utterly baffled by Cohle’s lecture, and I would have been, too—if Pizzolatto hadn’t already told me what he was up to.

“You could see Cohle as Job crying out to an unhearing God,” he explained. “Or you could see him as something else."

“Cohle describes the possibility of other dimensions existing, and he says that’s what eternity is,” Pizzolatto continued. “He says that if somehow you existed outside of time, you’d be able to see the whole of our dimension as one superstructure with matter superimposed at every position it had ever occupied. He says that the nature of the universe is your consciousness, and it just keeps cycling along the same point in that superstructure: when you die, you’re reborn into yourself again, and you just keep living the same life over and over. He also explains that from a higher mathematical vantage point, our dimension would seem less dimensional. It would look flattened, almost.”

Pizzolatto took a bite of his branzino. “Now, think about all the things Cohle is talking about,” he said as he finished chewing. “Is he a man railing against an uncaring god? Or is he a character in a TV show railing against his audience? Aren’t we the creatures of that higher dimension? The creatures who can see the totality of his world? After all, we get to see all eight episodes of his life. On a flat screen. And we can watch him live that same life over and over again, the exact same way."

The more I think about it, the more I think this might be the ultimate "meaning” of the series: that at some indivisible level, life is story. Much ado has been made online about all the references on True Detective to the Yellow King and Carcosa, as if they were aspects of a coherent satanic theology to which Ledoux & Co. subscribed—a puzzle to be unraveled eventually. But it’s telling that the Yellow King is a reference to The King in Yellow, an 1895 collection of horror stories by Robert W. Chambers that itself references a forbidden play called “The King in Yellow"—a play that in turn "induces despair or madness in those who read it.” It’s also telling that Chambers borrowed the name “Carcosa” from Ambrose Bierce, and that H.P. Lovecraft later borrowed it from Chambers.

In other words, the important thing about the Yellow King and Carcosa isn’t what they signify to Reggie Ledoux. It’s what they signify to us. They call attention to the story-ness of the story we’re watching. They tell us, as Pizzolatto put it to me, that Dora Lange is “meant to stand in for the universal victim for this type of show”; that Ledoux, with his comically archetypal 666, pentagram, and swastika tattoos, is the universal serial killer; and that True Detective is a form of metafiction.

We live in a networked world, but the paint on the ceiling and the wooden bar furniture seem unchanged, and the beer would still be more or less recognisable to a neolithic brewer.

On the other hand, the pub now has an app. It’s in the iOS store. It has beer launches, too, and while tweeting from it I was noticed by a local bookstore and invited to drop in for a flash signing. Verily, things sometimes do change – this would never have happened in 1998.

We are, in fact, living through the earlier moments of “Accelerando”, because that part of the novel the story “Lobsters” – was set in the predictable near-future. But “Accelerando” as a whole doesn’t seem to be coming true, and a good thing too. In the background of what looks like a Panglossian techno-optimist novel, horrible things are happening. Most of humanity is wiped out, then arbitrarily resurrected in mutilated form by the Vile Offspring. Cspitalism eats everything then the logic of competition pushes it so far that merely human entities can no longer compete; we’re a fat, slow-moving, tasty resource – like the dodo. Our narrative perspective, Aineko, is not a talking cat: it’s a vastly superintelligent AI, coolly calculating, that has worked out that human beings are more easily manipulated if they think they’re dealing with a furry toy. The cat body is a sock puppet wielded by an abusive monster.

The logic of exponential progress at a tempo rising to a vertical spike is a logic that has no room in it for humanity. It’s also a false apprehension based on the assumption that the current state of affairs will persist indefinitely. We’ve had these exponentiating progress spikes in the past; they generally turn out to be a sigmoid curve, and the rate of exponentially increasing progress suddenly flips upside-down, converging slowly with a plateau.